About Us > TE'A Project - Under the Veil: Being Muslim and Non-Muslim in NYC, post 9/11

Under the Veil: Being Muslim and Non-Muslim in NYC, post 9/11

TE'A, Under the Veil, a joint project of Radha Productions and Intersections International, and in local partnership with the NiteStar Program, focuses on the issues of being Muslim and non Muslim in NY, post 9/11. The Play, which is set in New York City, is timely, provocative, and constructive. It uses theatre, music, and spoken word to dramatize the everyday clash of cares and threats that divide Americans from each other in the wake of 9/11. But beyond dramatizing those barriers, it also functions dramatically to foster the curiosity, insight and compassion that audience members need to transcend them. Following this engaging interactive performance, the audience will participate in the “third act”, a facilitated dialogue that inspires curiosity and challenges our ways of thinking about and relating to each other.

The play was group devised by the TE'A Company NYC, under the direction of Cheryl Paley and Musical direction of Fred Johnson.

Created in 2009, Under the Veil has performed in many private and public theatres and academic institutions in the region, including the premiere at Intersections International, Essex Street Academy, George Mason University, George Washington University, La MaMa Theatre, Madison Avenue Baptist Church, Pace University, Temple Emeth, and York College (CUNY), among others.

Read what some people have to say about The TE’A Project, Under the Veil:

"This was a beautiful example of good theatre. There were nearly 300 people in the audience... with standing room only. The scenes depicting various situations [were designed] to make us think about diversity, to make you angry, to make you see and question yourself. The audience was moved and educated into becoming better people. I can't begin to recount all that was said after the event, but it was truly life-changing." –Janice Cline, Coordinator of the Cultural Diversity Program, York College, CUNY

"It was an amazing success. The kids have been talking about it all week and the diversity lesson yesterday was richer than usual. We even had one girl who had never worn a head scarf before (who) came in with one yesterday, inspired by you!!!"
–Nora Madsen, teacher, Essex Street Academy, NYC

“Seeing Under the Veil … engaged me emotionally, intellectually, and creatively. Under the Veil is doing a great service to all Americans by addressing the feelings that fuel suspicion, hostility, and conflict between Muslims and non-Muslims.”
–Isabelle Legare, Youth Program Manager, United Nations Alliance of Civilizations

The TE'A 2011 Build the Peace Tour:
During 2011, TE'A will take its signature play, Under the Veil: Being Muslim (and non-Muslim) in America, post 9/11, on a tour of colleges, universities and other institutions in the North-East region. 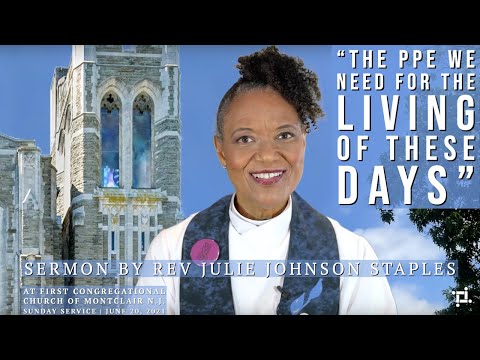 On Sunday, June 20th, Intersections International Senior Minister Reverend Julie Johnson Staples preached "The PPE We Need For the Living of These Days" at the First Congregational Church of Montclair's...